I read the Wikipedia article about Quahogs and I am transported to another place and time.

It is the summer of 2002 and I am 17 years old. I’ve just graduated from high school. In addition to my usual part-time job at an upscale local supermarket, I’ve taken another job at what people in my part of the world affectionately refer to as a “clam shack.”

The Cove Fish Market was a small store selling fresh fish and lobsters in the front, and a clam shack in the back. I’d spend hours every day spooning ladles of chowder into Styrofoam cups (the clear-broth, “Rhode Island style” was home made. The creamy-broth, “New England style” came in frozen.)

The team at the Cove was a mixture of fresh-faced, long-haired college girls home for the summer, and rough-edged, part-time alcoholic pot head townie guys who had started out as dishwashers.

Paul, who owned the Cove was at least 80 years old, made the best chowder I’d ever had. I didn’t care for “clear-broth” chowder one bit until I started working there. The soft blend of the broth with the cubed potatoes – the finely chopped Quahog clams – I asked my mother what she thought the secret was. “I hear he uses salt pork as a base.”

Only one guy on staff knew the recipe. The chowder needed to be prepared a day in advance, and Jay would start it on an outdoor gas hob behind the kitchen. Onions would sweat under the hot August sun in salt pork fat. I was too young to get a good sense of the recipe, and too busy spooning chowder and filling orders for lobster rolls and fried clams to ever get a good idea of his method – and for years I kept telling myself that clam chowder was one of those things I’d get around to making “one of these days.”

I was recently issued a cooking challenge to finally tackle clam chowder – albeit, involving goat’s cheese and chorizo. I give you this – which turned out smooth and silky, and will definitely be made again in this house before winter’s end. 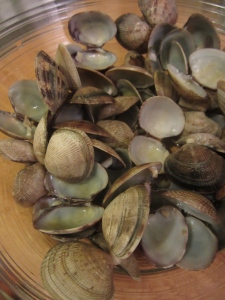 Rinse the clams and, if necessary, scrub away any sand.

Put 75 ml (3/4 cup) of the water, the vermouth, and the clams in a large soup pot over high heat. Cover and let come to a quick boil. Turn heat down to medium and allow to cook 2-3 minutes, or until clams have opened and are fully cooked.

Take the pot off the heat and remove the clams to a bowl with a slotted spoon. Pour cooking liquid through a fine mesh sieve into another bowl and allow both the clams and liquid to cool. Once cool, remove clam meat from shells, reserving a few shells for serving. Roughly chop clam meat and set aside.

In the same pot (without rinsing), heat the olive oil over medium heat and add the chorizo, cooking until the meat is somewhat crisp and has released some oil, coloring the olive oil red. Add the onions and celery. Cook, stirring occasionally, 5 minutes – or until onions have softened (but not browned.) Add the fennel, Old Bay seasoning, and thyme leaves. Cook about two minutes, stirring to incorporate all ingredients.

Add the potatoes, reserved clam cooking liquid, remaining 1L (1 cup) water, and bouillon cube. Let the soup cook, covered over medium low heat, about 20 minutes, stirring occasionally. It should rest at a low simmer. Once potatoes and fennel are soft and cooked through, lightly blitz with a hand blender just enough to thicken soup and unify broth color – do not fully purée soup as you want to keep lots of chunks. Then add clam meat and allow to cook another 5-10 minutes, uncovered. 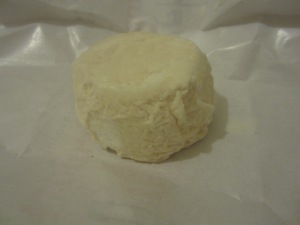 For each diner, prepare a goat cheese toast by cutting two thick slices of bread per person and topping each with one slice of fresh goat’s cheese. Put the bread in a baking tray and place on the top oven rack for five minutes, or until cheese is melted around the edges and bread is toasted. 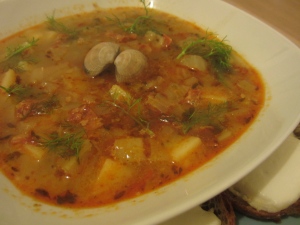 Serve soup at once, topped with one clam shell per portion, torn fennel fronds, and goat cheese toast on the side.