As a white, umpteenth-generation American whose grandparents were all born in New England, I didn’t have much experience cooking Mexican food until recently. I grew up eating ground beef tacos in hard shells with chopped iceberg and jarred salsa (and thanks Mom, it was delicious!) But as I’ve gotten older, I’ve developed a nasty of habit of bringing cans of tomatillos, chipotles in adobo, and jalapeños back every time I go to the states. I hoard them in the cellar and curse myself when the expiration dates glide past unnoticed. I ask traveling friends to sneak packages of dried Ancho peppers in their suitcases, and for a while I ordered delicious homemade tortillas from a little output in the 11th but then they closed. (If anyone has recommendations for a replacement supplier, please, tell me!)

When you live alone it feels silly to make a fuss opening a smuggled can of tomatillos to make homemade green enchiladas for yourself, but since I’ve had a life-mate, I’ve been experimenting more and more with my little Parisian American version of Tex-Mex to rave reviews. 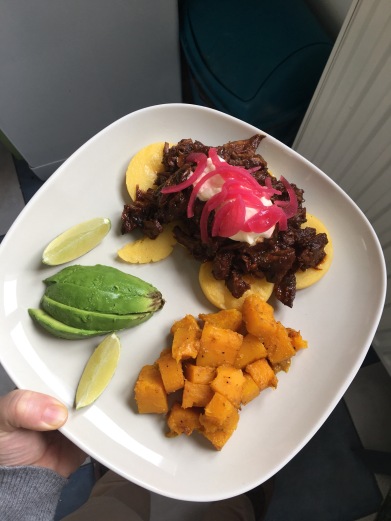 To celebrate my most recent revolution around the sun, I decided to orchestrate a taco fiesta for a considerable portion of my social circle. We attacked the buffet like a pack of wolves and the only photo I took of any of this food was of my leftover lunch the following day. NB: the only reason there was any pork leftover is because we ran out of tortillas. I also got a sweet battle wound (oven burn) throwing tortillas out of the oven and onto the table with the help of said life-mate and Ms. Tangerine.

We were thirty people. Everyone was satisfied, but I think everyone could have had one more taco (they were so good!) I planned an average of 3 tacos/person, plus corn chips with guacamole and salsa, and an array of desserts.

What follows here is my game plan.

Chilorio Pork from Serious Eats, doubled (seriously this is so good.)

Black beans
Cook 800g dried beans (without soaking) for 2-2.5 hours covered in simmering water with a halved onion, two bay leaves, and a dash of baking soda (new trick from an Italian friend.)
Shortly before serving, put some of the beans (I put half but I should have used more) and a bit of soaking liquid into a large soup pot with a cinnamon stick, some ground chipotle pepper, ground cumin, salt, ground coriander, and half a chopped red onion. Let simmer for 20-30 minutes, stirring occasionally, then take off the heat and let sit covered until serving (or serve immediately.) Any leftover beans can be frozen for a later use.

Sweet potatoes – three large
Peel and cut into strips about 1cm wide
Toss with sunflower oil, salt, pepper, and a dash of Chinese five-spice powder.
Roast at 200C in three trays (trying not to crowd them) for around 30 minutes, rotating and tossing around every 10 minutes or so.
Re-heat quickly in the oven before serving (on a dish or bowl – can be crowded for serving.)

Guacamole, tout simplement
Avocadoes (6 medium)
Lime juice (from 1-2 limes)
Garlic, pressed (1-2 cloves)
Salt (preferably Maldon or fleur de sel)
Ground cumin
Cut the avocadoes like you’re drawing a grid with a knife into the halved fruit (be careful not to cut your hand!LINK), then scoop the cubes into a big bowl with a spoon. All other ingredients are eyeballed/to taste. Mash everything together with a fork until it’s mixed but still chunky, throw in two pits from the emptied avocadoes to keep the green color, and put in the fridge uncovered until ready to serve. Make this 1-2 hours before serving. Note that the garlic will intensify while the guacamole is hanging out in the fridge, so if you or your guests don’t like it too strong, go easy!

Pineapple Salsa
This is an idea poached from fantastic yoga teacher and chef extraordinaire, Cameil, but modified to make a real sweet/savory addition to the tacos.
Half of one large pineapple, skinned, cored, and chopped fine
One medium red onion (or to taste,) chopped fine
5-10 sprigs of fresh mint, chopped fine
1 small fresh diced red chili
Juice of ½ lime
Dash salt
Mix all ingredients together in a bowl, and let rest in the fridge for at least 1 hour before serving. Delicious with chips for happy hour, or as a taco side.

Cilantro / fresh coriander
Served on the side and not included in any of the dishes, because some people think cilantro tastes like soap.

Red chili paste, served in a ramekin on the table
Served on the side in a ramekin because some people like it HOT.

Pickled red onions (that got forgotten in the fridge.)
One large red onion, chopped thin
350ml (roughly) cider vinegar
Handful peppercorns (all black, or a blend – I threw in a few green)
1 teaspoon sugar
1 teaspoon salt
Chuck the onions and peppercorns into a bowl, tupperware, or jar large enough to hold all the liquid. Heat the vinegar on medium heat with the sugar and salt until simmering, sugar and salt dissolved. Pour the vinegar over the onion mixture and let cool, at least 1 hour ahead, but will keep in the fridge for at least two weeks (thank goodness!)

2 thoughts on “A Taco Party in Paris”