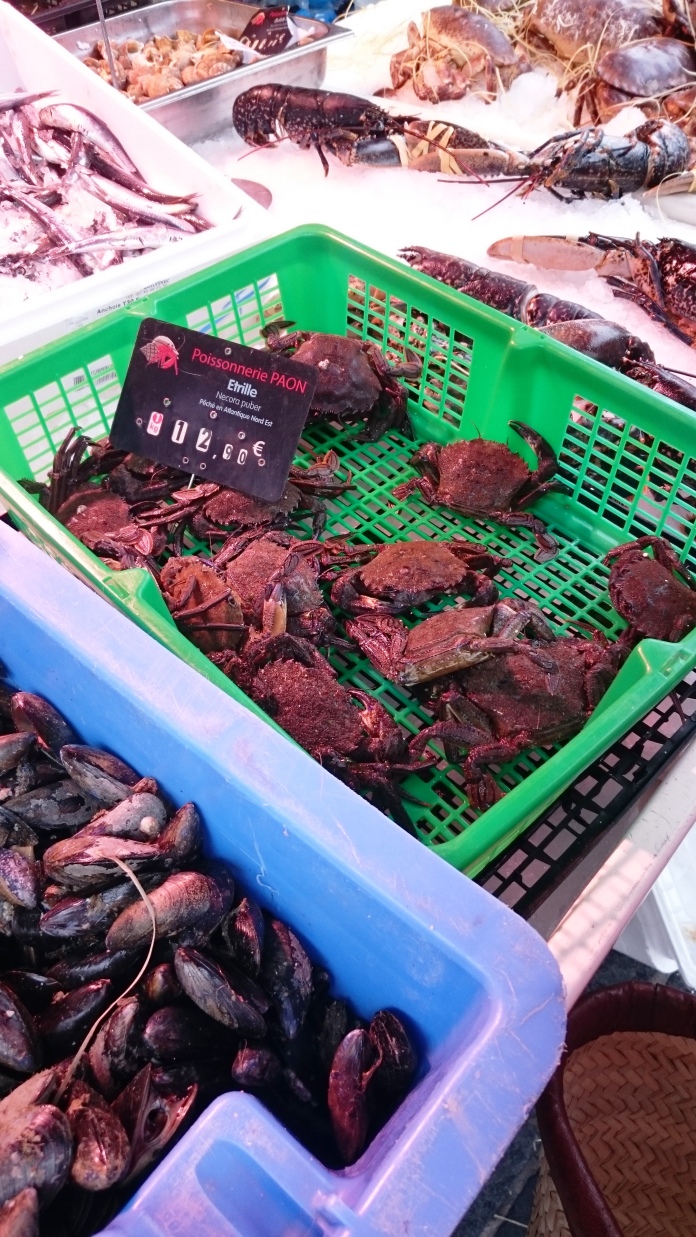 The woman in front of me in line orders a variety of crab whose body is no bigger than the circumference of a coffee mug. The hairy, freckled crustaceans are clamoring around in a green basket atop the ice, next to the lobsters who roam lethargically around one end of the stand. 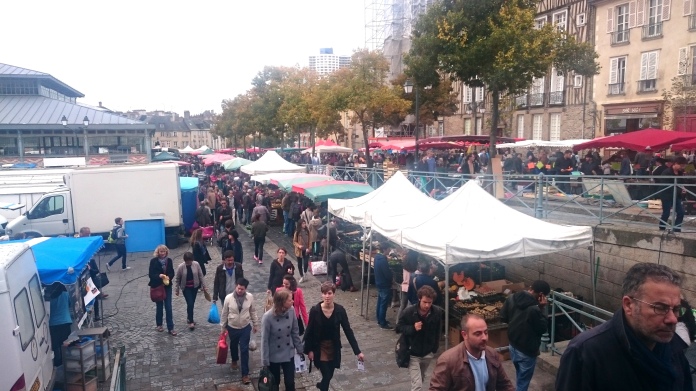 The weekly open-air market in Rennes is a sight to behold, with it’s painfully tender kouign amann pastries (you can never eat just one,) and it’s locally farmed cheeses that don’t have nationally recognizable names, just subtitles on their price signs that read “Ça déchire grave !” (it’s seriously awesome!) Many of the vegetable stands are run by elderly locals, or young apple farmers trying to make a go of it. There are crepe trucks – many crepe trucks – and I stand on the sidelines observing which one has the longest lines to figure out which one is the best. 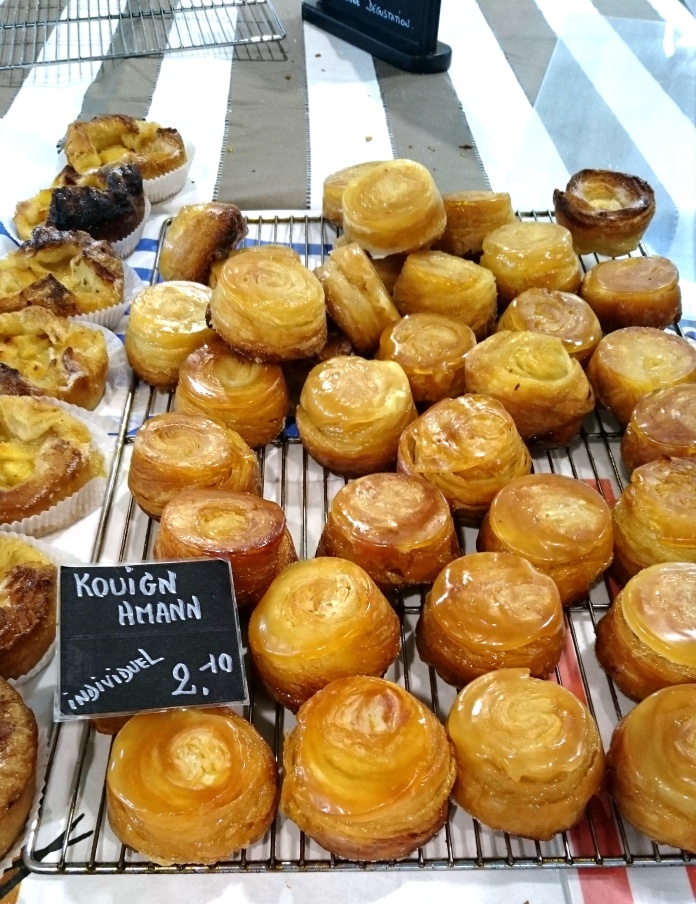 Extensive Google searching has not revealed to me which market, exactly, is the largest market in France. This is difficult to search for in French because when you look for statistics about the “largest food market” you find all sorts of economic figures about general food sales. In any case, the Marché des Lices can’t be far off from the biggest.

There is a kind of overwhelming, food-induced joy that comes over me sometimes: the first time I tried French demi-sel butter, with it’s large sea salt crystals; the first time my taste buds had the pleasure of meeting a Mogador macaron by Pierre Hermé (milk chocolate flavored with passion fruit;) and the first fresh salicorne (samphire) stalk I was able to pick out of the ground myself, along the salt marshes in Guérande, and crunch on.

When I was an American teenager employed at a gourmet grocery store in New England, I dreamed of French open-air food markets as glorious as the Marché des Lices. There is not one, but two covered market buildings: one filled with butcher counters, and the other filled with bakers, jam-makers, cheese-mongers, and other sellers. The outdoor space lying around the market has different sections: the fishmongers and oyster sellers on one side, fruit and veg crammed around everywhere else. Flowers are up the hill a bit, towards the Place Saint Michel.

The most difficult thing about shopping at this market is that I’m only buying food for a meal or two, before I have to hop back in the train to Paris the next day. It’s not exactly practical to carry home clams or crabs or whole fish filets. On this last visit, I decided to go with clams – sautéed with cider and topped with crunchy salicornes. 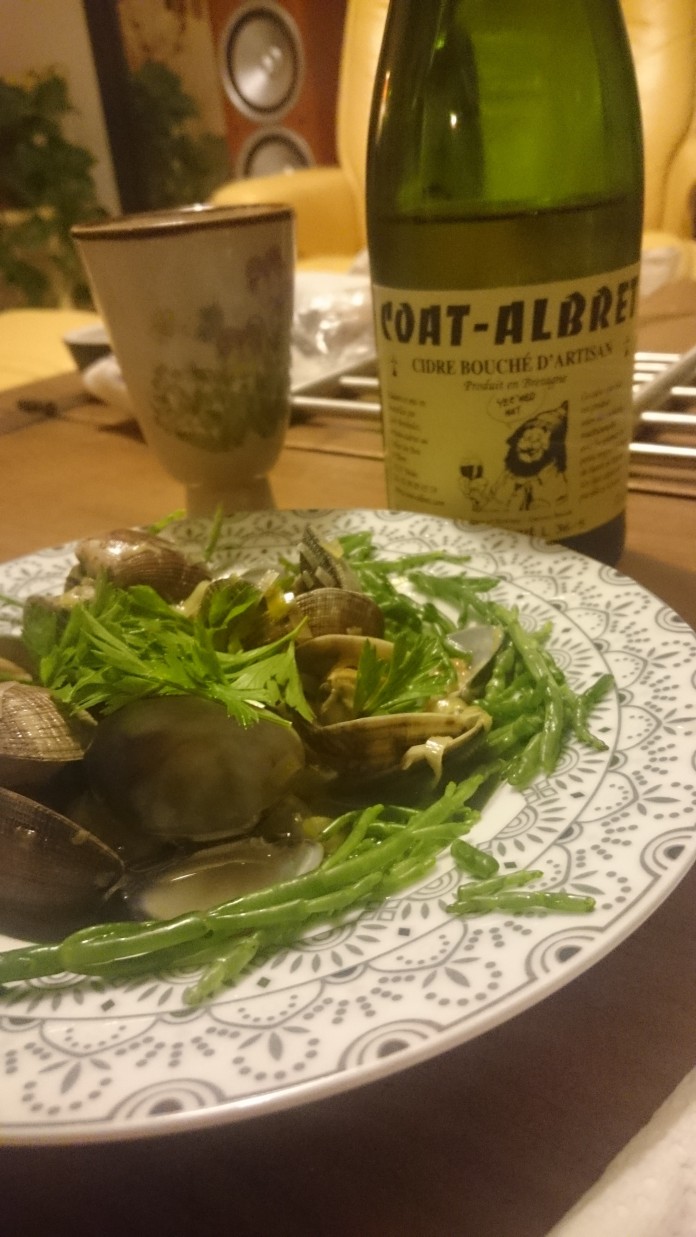 Sauté one finely sliced leek in a generous amount of butter, being careful not to let it brown. Once it is softened, about 8 minutes, add enough clams for a hearty starter for two, and about a cup of brut bubbly cider. Cover the pan, shaking gently every minute or two, until the clams have opened.

Serve topped with lightly steamed salicornes, a heaping of fresh parsley, and a cup of cold cider.

A few addresses in Rennes:

Crêperie Saint Georges, 11 Rue du Chapitre
We were almost put off by the gaudy décor in the entryway – don’t be! The crêpes are inventive and different, and most importantly, delicious.

Chocolate and espelette pepper crêpe at the Crêperie St Georges

Le Haricot Rouge, 10 Rue Baudrairie
THE place to go for a coffee, tea, or hot chocolate on a weekend afternoon. Noteworthy for the various different flavors of hot chocolate, and board games at your disposal.

One thought on “Marché des Lices”